Please download the following PDF files of choral selections for the competition:

ACDA-PA is pleased to share that the following choirs will perform at the Fall Conference at Susquehanna University in November: 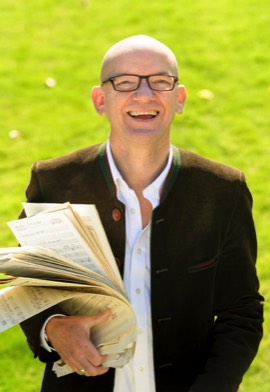 As a composer, conductor, and singer, Bob Chilcott has enjoyed a lifelong association with choral music, first as a chorister and choral scholar in the choir of King’s College, Cambridge, and for 12 years as a member of the King’s Singers. He became a full-time composer in 1997, embracing his career with energy and commitment, and producing a large catalogue of music for all types of choirs which is published by Oxford University Press.

He has written substantial sacred works including the St John Passion for Wells Cathedral Choir and the Salisbury Vespers. A Little Jazz Mass and the Requiem are amongst a number of works which continue to be performed worldwide. Other works include The Angry Planet, composed for the 2012 BBC Proms, and The Voyage for Age UK Oxfordshire, which in 2017 was nominated for a Royal Philharmonic Society Award. He has written many pieces for children, including his much-loved song, Can you hear me?, and a significant amount of music for the church. In 2013 he wrote The King shall rejoice for the service in Westminster Abbey to celebrate the 60th anniversary of the coronation of Her Majesty, Queen Elizabeth II.

Bob has conducted choirs in more than 30 countries worldwide and has worked with many thousands of amateur singers across the UK in a continuing series of Singing Days. For seven years he was conductor of the Chorus of The Royal College of Music in London and since 2002 he has been Principal Guest Conductor of the BBC Singers.

His music has been widely recorded by leading British choirs and groups including King’s College, Cambridge, Wells Cathedral, Westminster Abbey, The King’s Singers, The Sixteen, Tenebrae, The BBC Singers, The Bach Choir, Commotio, and Ora. In 2016 Bob enjoyed a collaboration with the celebrated singer Katie Melua and the Gori Women’s Choir on the album In Winter, which reached the top 10 in the album charts in the UK and Germany. His first Christmas disc, The Rose in the Middle of Winter, was recorded by Commotio and released on the Naxos label. A third Christmas disc will be released in 2017, recorded by Washington, DC-based choir, Choralis, on Signum. Also in 2017 Commotio releases All Good Things, which includes the Nidaros Jazz Mass and Jazz Songs of Innocence.

In 2017 Bob was awarded an Honorary Fellowship of The Royal School of Church Music.

Writing Music for Choirs - Bob Chilcott is passionate about enabling choral singing, and divides most of his time between composing and conducting choral music.  Today he talks about the importance of text, vocal line, musical appeal, and a little about how his time as a chorister and later a member of the King’s Singers has influenced the music he writes today.

Housing
A list of hotels near Susquehanna University can be found at http://hotelguides.com/colleges/pennsylvania/susquehanna-university.html

Held in conjunction with the Pennsylvania Collegiate Choral Festival

REGISTRATION CHECK-IN
​located in Stretansky Hall in the Cunningham Center